One of my favorite shows of all time. When our theatre decided to do it, I knew I would audition, but before that I said I would be the properties designer. I knew the props would be a challenge, with Rapunzel’s wig and the harp and the million other things necessary for the show.

In volunteering for that position; however, I kind of forgot about one thing.

How the hell was I going to do the cow?

I looked into renting one, and all of the cows available were way out of my budget and also did not look the way I wanted them too. Needless to say, it’s hard to find a Milky White that is affordable and doesn’t look ridiculous. Our Baker was 6’5”, and I wanted to make sure that she looked like a cow, not a calf. She also needed to role freely on our stage and be light enough to pick up, but I was determined that she not look like a toy. This cow also had to be strong enough to fall over multiple times every show. I ruled out papier mache, because I thought that as many times as the cow had to fall, I’d have to put 800 layers on it to keep it from denting. I ruled out wood because it would be too heavy. And I ruled out Styrofoam, because I thought that would actually be too light and Styrofoam can be tricky to work with.

So, I started sketching and watching videos on carving spray foam. I asked one of my guys to build me a frame out of PVC pipe and attach casters to the bottom, making Milky-White’s legs and feet. After that, I made a rough outline with chicken wire and stuffed her with newspaper. Sounds a lot like papier mache so far, I know, but now it gets different. I bought, well, quite a bit of spray foam – the stuff that expands over an inch, and I started giving Milky White some substance. I’ll admit, there for a while, she looked like a headless sheep. (I chose to do the head last, as I still had to figure out how to give her a functioning mouth.)

I carved what I had sprayed so far, making the foam into rough shapes. At this point I was still thinking I would paint the spray foam directly, so I took some extra time getting the shapes of the legs and the udder proportionate. After this I had to tackle her head and neck. She had to have enough room for the items, i.e. the shoe, the hair, and the cape, to all fit inside the mouth/neck and be extracted easily. I had a four short pieces of PVC pipe to help support her neck, which I put chicken wire around, but I left the part in the middle of the pipes hollow. I then took a cardboard box and put it around the pipes, and then attached other pieces of boxes to give the general shape of her head.

Her mouth was a bit of a challenge. We had talked about making all kinds of complicated ways for her mouth to open and close, and I eventually decided simple was better. I took half of a 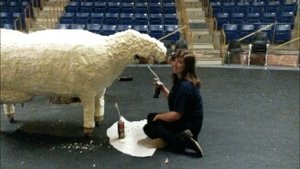 Simply Orange orange juice bottle and placed the neck part of the bottle inside of my box. I attached it with little screws, and Voilà! You have a flexible piece that will act as a mouth that you can cover with paper and paint. After the boxes were the right shape, I spray foamed the head (not the mouth) and carved it all into the shape I wanted.

I want to tell you, there was a moment where I made Milky-White look like the Brain on Pinky and the Brain. Her head was huge. It was terrifying. I carved that brain down until it wasn’t weird anymore. Just be aware, it could happen. That spray foam can get a little excited in there and expand until it’s Megamind sized.

We’re getting close to the end here, and by this point I was ready to take Milky White and burn her. But no one was saying she looked like a sheep anymore, so that was a bonus. I slapped some white paint on her, and decided I was a moron. White paint on carved spray foam looks like crap. Crappy crap crap. I remembered then I’d watched a video where a guy had to fill in all of the bubble holes. Well I didn’t have time for that, so I thought, what if I cover her with muslin?

That’s what I did. Best decision ever.

I took giant pieces of muslin and basically dutched it onto my cow. It gave her a hide. I used white paint and shaped the muslin around the eyes like I needed to, and was able to give her some wrinkles and stuff like she would have because she’s not exactly a healthy cow. For her teats, I did actually take latex gloves and filed them with sand. I tied them off, stuffed them inside a hole I had made in the spray foam, and then dutched around the hole so they were still able to move but not fall out.

Now, Milky-White looked scary as heck at this point. Creepy mummy style, but I could see the light. I grabbed my black and gray paints and started giving her some details, I made her udder a very, very, light pink, and I’m telling you, this cow came to life! She finally was looking like a cow, and you know what? She was cute!

My friend Lily made some ears out of wire and felt, we stuck some hair on her head borrowed some old false lashes from the makeup room, and bam! We had a cow. After the show, audience members wanted to take pictures with her. My dad, who is a farmer, even said she looked like a cow! Fist pump! People often tell me that they were really worried about the cow, they didn’t see my vision. I’ll tell you, I was worried about the cow too.

If I had to do it again, which I hope to God never happens, I would do it a few things differently. Her frame would be a different shape, and that would help her not be quite so round. Overall, though, I was so happy with the finished product. She held up for 7 shows, and then another theatre rented her and she held up for all of their shows too. I was so happy I stuck with her. She’s not perfect. She’s got some weird leg stuff going on. But she has a cute face, and when our Jack leaned down and looked into her eyes, you could believe she was looking right back.

Latest News from The Guild: Summer 2022